You are here: Home1 / History

Brief History of the United Diocese of Kilmore, Elphin and Ardagh

‘A number of prominent saints and monastic settlements are associated with the united dioceses. St Fethlimidh, born around 500AD, is traditionally accepted as having been the first bishop of Kilmore diocese. St Patrick is reputed to have founded the See of Ardagh around 435 AD and appointed his nephew St Mel as its first bishop. Another of St Patrick’s monastic settlements at Elphin was placed in charge of Assicus, a renowned craftsman around 450 AD. In the sixth century, St Mogue of Templeport was strongly linked with the monastic settlement at Drumlane that had been established by St Columba. Around these and other religious centres the early church grew and established itself.

The boundaries and extent of the dioceses of Elphin and Ardagh were established and settled at the synods of Rathbreasil (1111) and kells (1152). Co-existing within this new diocesan framework were a number of religious orders who were already established or arrived in the dioceses during the thirteenth and fourteenth centuries. These included the Augustinians at Drumlane and Mohill and the Franciscans in Cavan town.’

Post-Reformation and the Seventeenth Century

‘Throughout the early decades of the seventeenth century, the structures and institutions of the existing church were vested in the newly appointed Protestant bishops and clergy. This facilitated the ‘newcomers’ who came as part of the various plantation schemes at this time. The first bishop appointed in 1603 to Kilmore and Ardagh was Robert Draper. It is however, one of his successors, William Bedell, appointed in 1629, who became one of the outstanding personalities at both diocesan and national level during the seventeenth century. Although many of the improvements and changes brought about by William Bedell in terms of the organisation of the Church in the diocese and the provision of a resident clergy proficient in the Irish language were thrown into turmoil as a result of the 1641 Rebellion, his legacy as a tolerant yet reforming bishop remained. Bedell was responsible for the first translation of the Old Testament into Irish.’

In 1749, Bishop Edward Synge, ‘undertook a census of his diocese, using a specially designed form and his churchwardens as his enumerators. The original manuscripts comprising the census are held today by the National Archives of Ireland. In the absence of other source material containing such social and demographic detail, the 1749 Census of Elphin provides a unique insight into a rural region of Ireland in the mid-eighteenth century.’

‘The dominant ecclesiastical dynasty in the dioceses during the latter half of the eighteenth century and throughout most of the nineteenth century were the Beresfords. Bishop George Beresford built the See House at Kilmore in the Grecian Revival style between 1835 and 1837 to a design attributed to the Dublin based architect William Farrell. His son Bishop Marcus Gervais Beresford oversaw the construction of Kilmore Cathedral and later as Archbishop of Armagh and Primate of All Ireland, lead and guided the Church of Ireland during disestablishment.’

‘A number of people from the dioceses have helped shape the Irish education system during the latter decades of the twentieth century. Florence (Florrie) Armstrong of Drumaloor Church was principal of the Dalkey School Project in Dublin from 1978 and, from this, the Educate Together schools of today have evolved. She had been hailed as ‘one of the key pioneers in Irish education’ whose child centred approach to education was to become ‘The New Curriculum’ of 1971. More recently, Dr Harold Hislop of Kilmore diocese, since 2010, has been Chief Inspector in the Department of Education and Skills in Dublin.’

‘At the turn of the millennium, Ken Clarke, was appointed Bishop of Kilmore, Elphin and Ardagh. In 2005, he initiated a programme entitled,  ‘Forward  – Growing Healthy Parishes’ and led the dioceses until 2012 when he became the Mission Director of the South American Mission Society (SAMS) Uk & Ireland. In 2013, Bishop Ferran Glenfield, a former rector of Hillsborough, County Down and Kill o’ the Grange, Dublin was elected bishop of the united dioceses. He and his wife, Jean and family are the first residents of the new See House at Kilmore completed in summer 2013. The diocesan archive is housed in the library of the RCB.’

1. The Arms of the United Dioceses of Kilmore, Elphin and Ardagh – Per fesse in chief, argent, on a cross azure a crozier surmounted by a mitre in pale (Kilmore). In base, per pale on dexter side, sable, two croziers endorsed in saltaire or, in base, a lamb couchant, argent (Elphin), and on the sinister side, argent, a cross gules, between twelve trefoils vert, and on a chief azure a key erect (Ardagh). 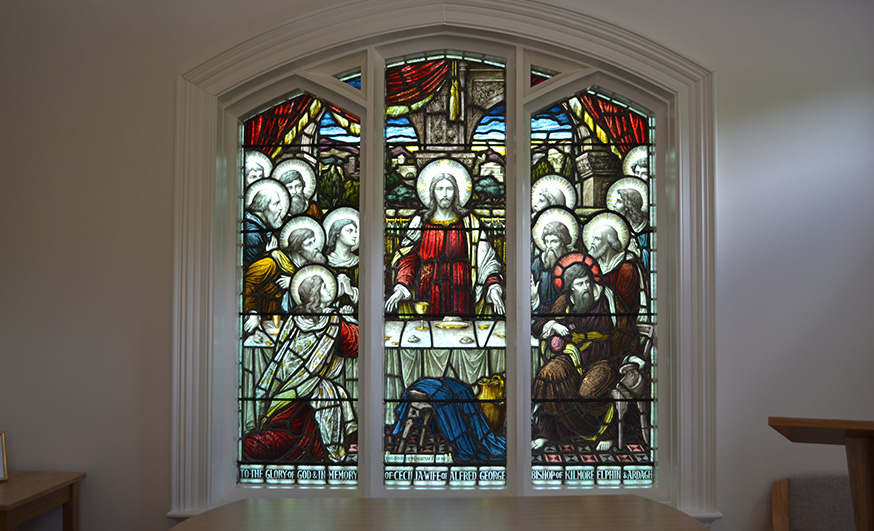 Dublin, The Most Revd. Michael Jackson, at the West Door of Armagh Cathedral following the service. 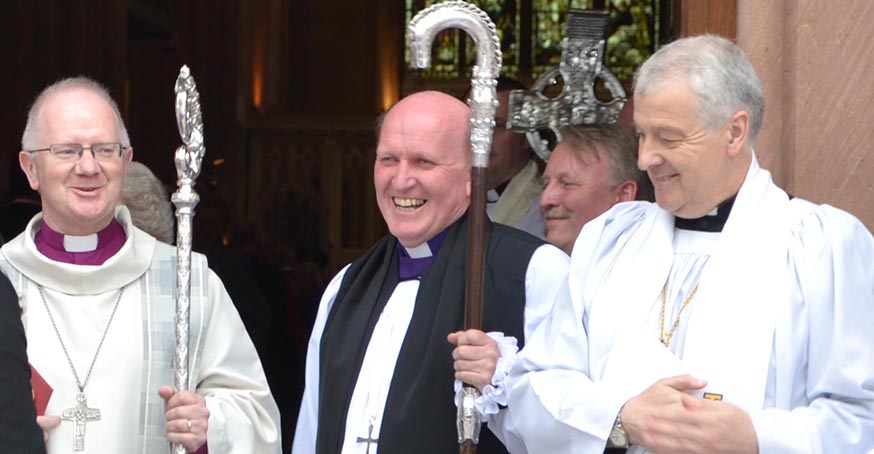 4. The New See House – This was officially opened on 20th June.

Want to join the discussion?
Feel free to contribute!