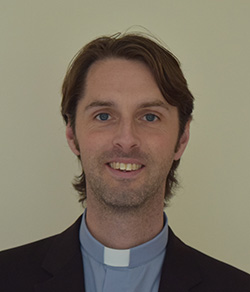 Ian is originally from Greystones in Co Wicklow.  Having earned qualifications in Business Management and in Sound Engineering & Music Technology he went to work for The Leprosy Mission Ireland.  Following that he spent 5 years as Youth and Children’s Co-ordinator at Kill O’ The Grange Parish in Dublin.  Having felt God’s call to ministry he started training in 2011, and was ordained as Presbyter in 2014 after completing placements in Christ Church Bray, Christ Church Wharton (Cheshire, Uk), The Parish of Powerscourt with Kilbride, and serving as Deacon in Greystones Parish.

Ian is married to Jenny and they have two sons, Sam (3) and Leo (1).  In his spare time he enjoys music and football.  He and his family are looking forward to continuing to journey with the people of Bailieborough, Muallgh, Shercock and Knockbride with God’s Word lighting the way.  ‘Your word is a lamp to my feet and a light to my path.’ Psalm 119:105

Ian’s Institution will take place at in Bailieborough Parish Church on Sunday 27th November at 7pm.