You are here: Home1 / News & Events2 / Service of Welcome for Revd. Edward Yendall as Minister-in-Charge of the... 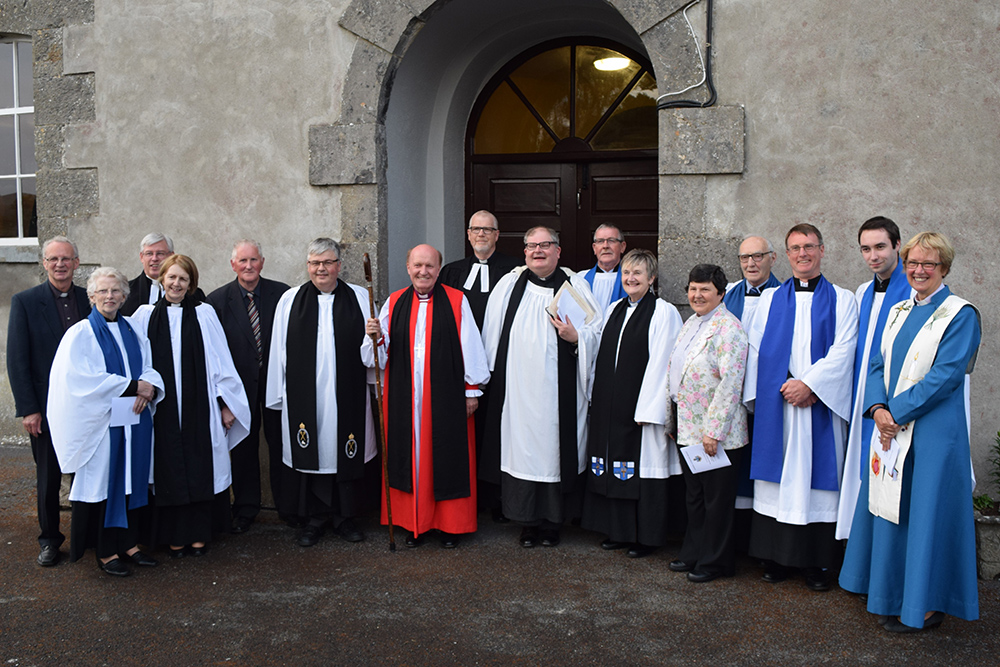 On Thursday 1st June friends, colleagues and parishioners gathered in Boyle Parish Church to welcome Revd. Edward Yendall as the new Minister-In-Charge (part-time) of the Boyle Group of Parishes (which includes Boyle, Aghanagh, Croghan and Ardcarne). The service was led by The Rt. Revd. Ferran Glenfield, Bishop of Kilmore, Elphin and Ardagh assisted by the Ven. Isaac Hanna, Archdeacon of Elphin and Ardagh.

Revd. Edward has joined the Diocese from North Wales where he has served in a number of positions of ministry over the past 29 years. Before he was ordained, he worked in accountancy and in the printing industry before going to St John’s College, Durham to train for ministry. He completed his degree there and was also the College’s Organ Scholar.

Revd. Edward was ordained at Bangor Cathedral in 1988 and served as Curate at Bangor and Minor Canon of the Cathedral. He then went on to serve in a number of positions across Wales including at Llanrhaeadr where the Bible was translated into Welsh.

Revd. Edward has strong ties to Ireland. He served for ten years in a group of parishes on Angelsey where, on good days, Ireland could be clearly seen across the sea! He has also visited Ireland on many occasions and has been to practically every county on these holidays – from Antrim to Kerry!

In his new position in the Boyle Group of Parishes, Revd. Edward will be serving the Church of Ireland, Methodist and Presbyterian communities in the area. It is, perhaps, a unique arrangement in Ireland. In his address, Revd. David Bruce,Secretary of the Board of Mission in Ireland for the Presbyterian Church spoke of church unity. He said that those of us who come to Jesus attain a new citizenship which sits on top of our differences in culture, politics, nationality or religious practice and allows for unity. This unity is not about our attempts to relate well to one another but rather about how Christ relates to us – our unity comes from Him. This unity in the body of Christ is a powerful witness of the transformative power of God in this world. Following, the address prayers were said by Rev. Dr Heather Morris, Home Missions Secretary of the Methodist Church.

The service was followed by a delicious tea in the church during which further words of welcome were expressed to Revd. Edward by Rev. Canon Jerry Hanley on behalf of the Catholic Church, David Gillespie on behalf of the Boyle Group of Parishes and the Ven. Isaac Hanna on behalf of the Diocese.

A presentation was also made to Adam Norris who has been faithfully looking after the Boyle Group of Parishes during the vacancy.

Revd. Edward thanked everyone for the warmth of their welcome and said he is looking forward to pastorally caring for the parishes of the Boyle group and to helping others develop their own ministries. It is his prayer that Christ will lead us onward through the power of His Holy Spirit as he undertakes his new task.