St. Fethlimidh’s Cathedral, Kilmore was full last Friday evening as colleagues, friends, family and parishoners gathered for the Institution of The Revd. Nigel Crossey as Incumbent of the Kilmore Group of Parishes and his Installation as Dean of Kilmore. The service was led by The Rt. Revd. FerranGlenfield, Bishop of Kilmore, Elphin and Ardagh assisted by the Ven. Craig McCauley, the Archdeacon of Kilmore.

Revd. Nigel served as Chaplin to St Columba’s College in Dublin prior to his appointment as Dean of Kilmore. He was born in Belfast and read Classics at Christ’s College, Cambridge before studying for ordination at the Church of Ireland Theological College in Dublin. He was ordained for Drumglass Parish, Dungannon in 1984 before becoming Rector of Magheraculmoney Parish, Kesh in ClogherDiocese. He has also served in chaplaincy roles across the United Kingdom and Europe. Nigel is married to Yvonne and they have four children and one grandchild with another soon on the way.

The music for the service was wonderful with singing led by the Cathedral choir directed by Raymond Fergusson and accompanied Vera Pollock playing the organ. In an address given by Revd. Barry Paine, Rector of Balinderry Group of Parishes, Armagh, Nigel was described as an intelligent, challenging, fair, faithful, tough, forthright, profession, loyal, committed man, a man who would champion injustice, a person of God, a person of prayer and a person of the Scriptures. Revd. Barry said that the church should be a ‘beauty spot’ in a world of fear, desperation and fragility. Speaking from 2 Corinthians vs 8, he said that the church should be searching for a vision for a better way forward and excellence in faith, speech, knowledge, earnestness and giving. He encouraged the congregation to pray for Revd. Nigel as he came to serve in the Cathedral Church of St. Fethlimidh and Ballintemple Parish Church.

The service was followed by a wonderful tea in the Parish Hall and the warm reception was very welcome on a chilly evening. Canon Horace McKinley, Rector of Whitechurch, Dublin opened a series of speeches welcoming Revd. Nigel which was followed by words of welcome from Wendy Swan, representing the Kilmore Group Parish Nominators, Sam Scott, the Rector’s Church Warden of St. Fethlimidh’s Cathedral Church and Robert Lowry, the People’s Church Warden of Ballintemple. Canon Mark Lidwell, the longest serving Rector in the Diocese, extended warm wishes on behalf of the clergy and the Cathedral Chapter. Revd. Nigel said that he was touched by the generosity of his welcome and thanked everyone who had gathered and travelled and made the effort to attend the service. The formal proceedings of the evening concluded when Alana Cowan presented Nigel’s wife, Yvonne, with a bouquet of flowers. 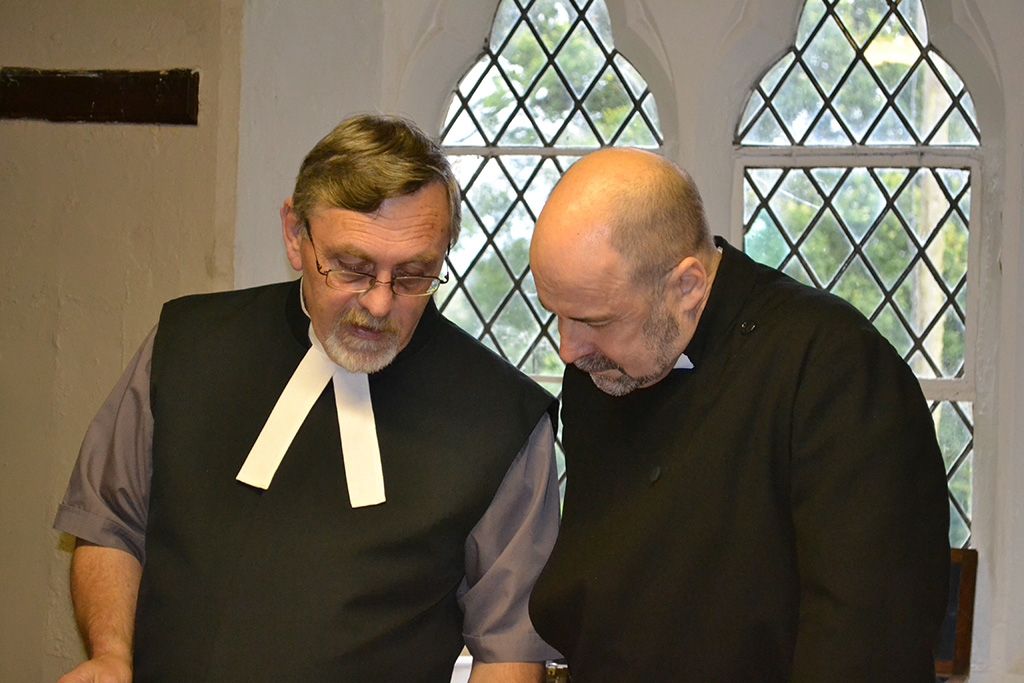 The photograph was taken by Andrew Quill and is of the new Dean making his declarations of office. In the photo are: Dean Arfon Williams and Revd. Nigel Crossey.

Revd. Isaac Hanna Instituted as the new Rector of Drumcliffe, Lissadell and... Ordination of Alastair Donaldson and Raymond Kettyle
Scroll to top