St Catherine’s Church of Ireland, Fenagh, County Leitrim has been nominated for a special award by the National Lottery in the Heritage category for the Connaught region. We are going to make our presentation to the committee on 8th October in Athlone, and will attend the awards ceremony in the Burlington Hotel and to be shown live on TV3 on 3rd November. Many thanks to the National Lottery, Beresford and AllChurches Trusts, our sponsors for the Dream Auction held in 2016, RCB, the committee and the community of Fenagh and surrounding area. Without all your assistance we would not have achieved as much as we have.

The Church was completed in 1790 but the first record is of a Daniel Nellye, vicar of Fenagh in 1615. The Church was featured on the Department of Arts, Heritage, Regional, Rural and Gaeltacht Affairs National Inventory of Architectural Heritage (NIAH) website www.buildingsofireland.ie for the month of May (many thanks to Damian Murphy, Architectural Heritage Officer), when we had a re-dedication service in 2017. At the same time, a memorial plaque to General Primrose was also dedicated. We have also featured in the September/October 2017 issue of the History Ireland publication and our photo was used by the National Lottery on their country-wide poster.

So how did our small project achieve so much? We started out with building on the original project in 1988 which saw the local community and FAS save the Church. This had declined to the point that trees in the grounds were used for the roof. Because a lot of knowledge had been lost along the way, the hyper-course system used to heat the Church had become blocked and this led to the rotting of the wooden floor which collapsed during a wedding in the 1990’s.

The building was only occasionally visited until 2015, when I visited the Church to see the stained glass windows. The Churchwarden, John Moran approached Rev’d Linda Frost for permission to apply for a grant to replace the floor with the assistance of National Lottery funding. This was the only way we could achieve the repairs. Since then, we have obtained funding through the Structures at Risk and Built Heritage Infrastructure grants, Beresford and AllChurches Trusts to have all the stained glass windows repaired and restored, some of which had been vandalised. The entrance pillars, roof, gutters, and the Vestry ceiling have all been repaired, together with lime plastering internally. The wooden windows, some with their original 1880 glass have been repaired and painted. Finally this year we have painted the Church internally.

We would never have been able to undertake all of this work without the financial grants and assistance we received. However, we could never have achieved what we have without the wonderful support and hard work of our committee, but most of all, the community of Fenagh and surrounding area who have supported our fund-raising events. We are very grateful for the support of the local Catholic Church in helping us to put on fund-raising events and lending of church items. This includes the fund-raising event on 25th October 2018 featuring the Garda Band.

We would like to give recognition to the 500 odd other projects in the National Lottery category that did not make it. Every project is unique and special. Our project started off by trying to save a building from joining the other ancient ruins in the village of ring forts, dolmens and Abbey’s. It turned into being a project of bridge-building between denominations. We started with small footsteps but hope to have lasting footprints. We wanted to save a building declining to a space available for future generations. We started out being about saving a Church building, but we have ended up being about inclusion and building connections within the community.

Of course, like all Churches, we have our ‘stories’. There is the one about General James Primrose, (1819-92) husband of Elizabeth de la Poer Beresford, daughter of the Clergy based at Fenagh. Quite unknown to us, his great grand daughter Mrs Sue Tyser and another relative, Caroline Jones, decided that it was time to find out what the General’s papers, which had been left to Sue, actually contained. They contacted Dr Caroline Jackson, an Oxford Historian, who transcribed two of the General’s diaries and put his papers in order. She found that as a young man he had taken part in famine relief work near Fenagh; his career ended as Governor of Kandahar in Afghanistan during the Second Afghan War (1879-1880) One of the diaries has now been published. But the General’s final resting place was a mystery. The search for it took Caroline Jackson 5 whole years but in the end her email to Rev’d Linda Frost resulted in his remains being found. There was an unlisted tomb in the graveyard, and by the simple act of sprinkling flour into the faded engraving on the tomb, the lettering revealed the burial plot of General Primrose. Sue Tyser, Caroline Jackson and Caroline Jones visited for the unveiling of a plaque to General Primrose at the re-dedication service in 2017. The irony is, General Primrose originally from England, died in Dublin, was buried in his wife’s family graveyard. His wife from Fenagh, is buried in England.

But we had a big dream of bringing a church building back into use, to help other people have their dreams too. A girl had a dream of getting married in St Catherine’s Church. The last family wedding in the Church was 71 years ago nearly to the day when her aunt Aileen Booth married Edward Knott. The girls own mother got married in Ballinamore, as St Catherine’s Church was in disrepair. As the years went by, and the girls Grandma and special granddad were laid to rest in the graveyard, she thought her dream was not going to happen. Then, three years ago, repairs started on the Church and on August 16th, the dream came true. We helped that dream become a reality for the family.

And of course, there was the day that sadly, the funeral of Luke Sempler was to take place. With enthusiasm, the hyper-course heating system was lit ready for the event. Unfortunately, no account had been taken for the return of the crows who had built a nest in the chimney. The resulting thick smoke filling the Church meant that all the heat was lost with doors opened. I can still remember the organist arriving and leaving rapidly, coughing and spluttering! Rev’d Linda Frost says she will always remember arriving to find me praying at the back of the Church for the smoke to go! Luckily, by the time the funeral party arrived, the smoke had gone. 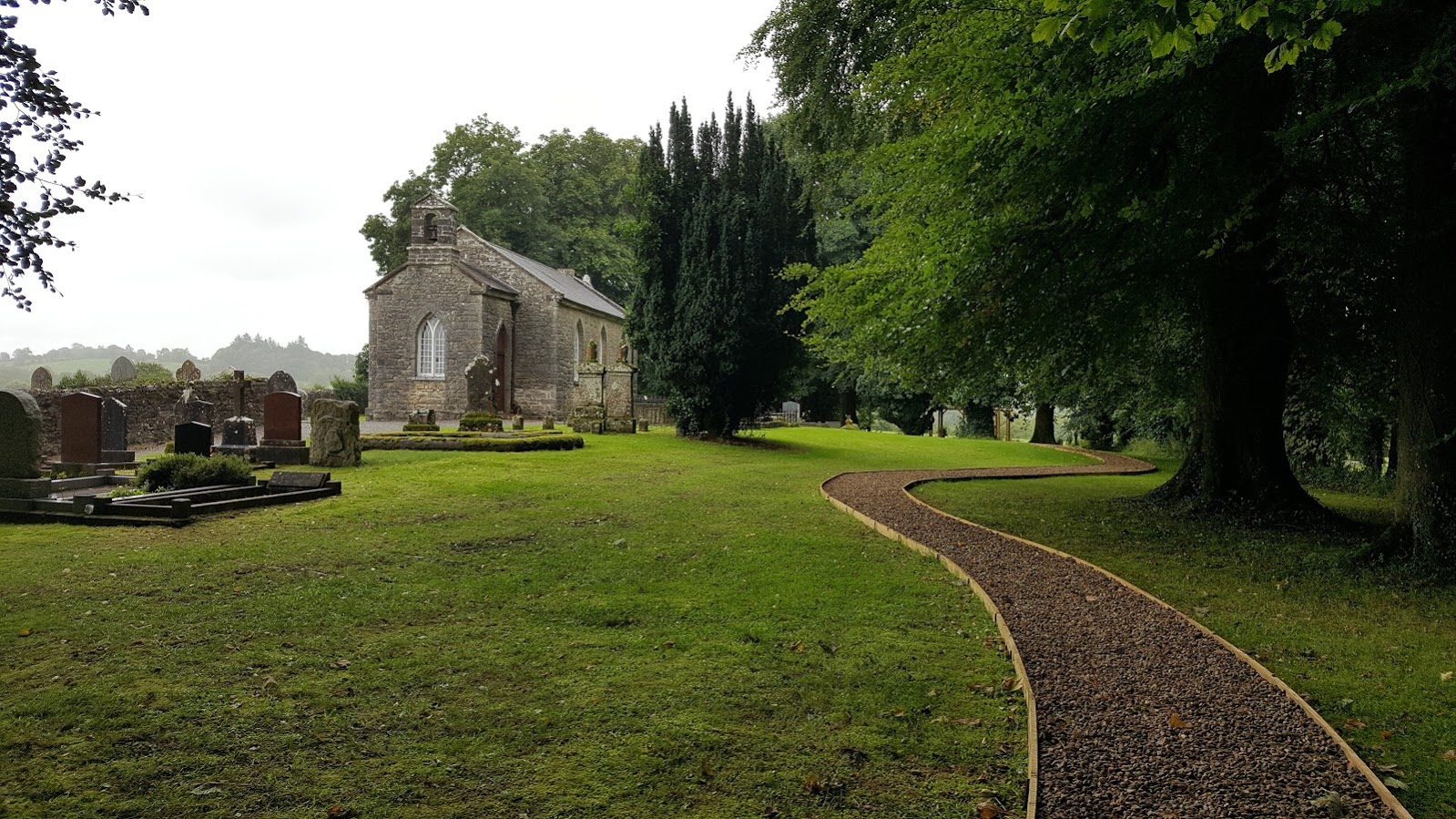 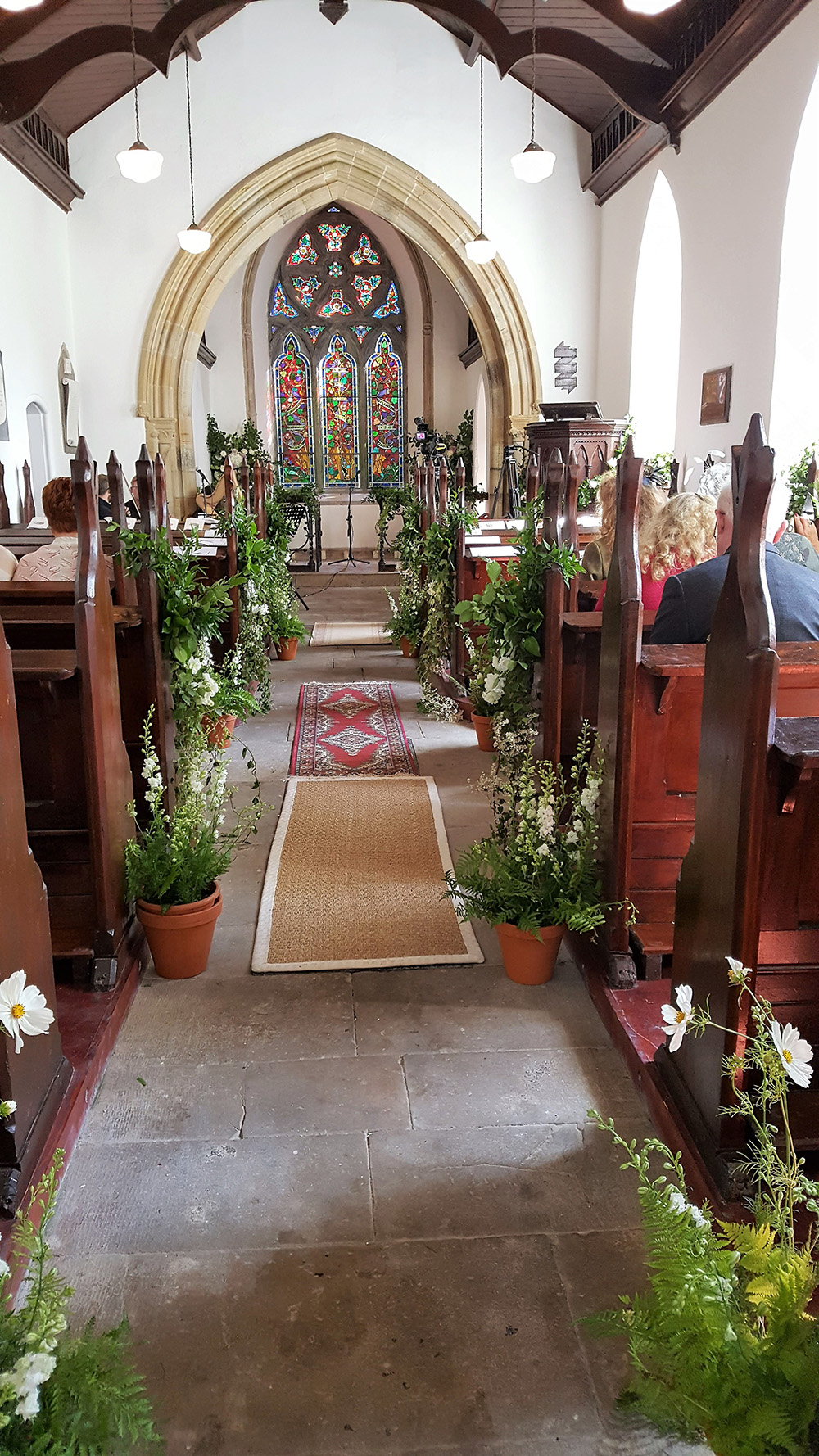